This week’s Wednesday Reads was one I’d heard about over and over again but hadn’t gotten around to quite yet… until I saw that it was on Kindle Unlimited! Once I saw that, it moved to the top of my list. (Don’t you love Kindle Unlimited? Me, too!) 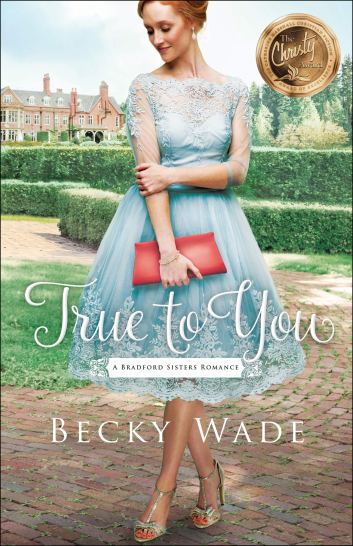 True to You by Becky Wade centered around Nora Braford, a librarian and genealogist in a small town in Washington. The cover art had me thinking that it was a historical romance, but it’s a modern day story. Nora just dresses like that! (And hooray for cover art that actually matches up with the character description in the book!) Within the first scene, Nora meets John Lawson, a former Navy SEAL and a Medal of Honor recipient, as she’s a volunteer for a training program that his security company is running. She’s as flustered as any of us would be if we met a hot, young Navy SEAL (even older ladies like me would get flustered) and verbally vomits all the details of her career right onto him without him asking for them. Lucky for her, though, John is in need of a genealogist’s skills for some ancestry research he needs to do after receiving a sobering medical diagnosis. From there, the two of them forge a friendship while working together… a friendship that leads to more, of course.

I loved that this book didn’t just focus on the romance. There was so much else going on with the plot and with secondary characters (laying down plot lines for Nora’s other two sisters and their books), and for a good portion of the story, John had another girlfriend, making for a slower pace that gave the relationship buildup between the two main characters a more natural, authentic feel. Nora was written to be a lovable bookworm with a strange obsession for British dramas (and leading actors, which becomes a big part of the story), and John was written as a humble hero in need of a compassionate and gentle woman. I wondered at one point why the author gave us such sad and heartbreaking details regarding Nora’s own family (which seemed out of place at the time), only to realize later that it was a pivotal part of the story. (And wow, I didn’t see that plot twist coming at all.) In the end, the Gospel was clearly communicated, and the happily ever after was realistic – happiness and joy even in the midst of the challenges and struggles of real life.

This was my first Becky Wade book to read, and I’d love to read more by her, especially books that deal with characters who aren’t rich or Medal of Honor-winning Navy SEALs. I know, I know – this is a thing in romance novels, kinda like the billionaire thing, which is fun sometimes. But the spiritual conclusions reached in this story were so poignant, and I would’ve loved to have seen them realized by average, every day characters. That said, this was a fun read, and I can definitely see why it’s so beloved by so many. (And did I mention that the whole series is on Kindle Unlimited?!)