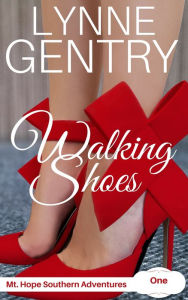 This book was recommended to me by a reader because I’m a pastor’s wife who worries about what people will say when anyone in our family buys new shoes. (Because people get really riled up about such things.) That EXACT SCENARIO is how this book starts, and then… well, then it takes an unexpected turn.

Walking Shoes is a book about a pastor’s wife, Leona, and her life in a small town community in West Texas. I hope I’m not spoiling too much by telling you that within the first chapter, the pastor (the main character’s husband) has a heart attack and dies in the pulpit. (Incidentally, this is how my own husband wants to go. Preaching Scripture up to his last breath.) Immediately, the drama begins with the grown adult pastor’s children, with Leona’s awful mother, and with – of course – the cast of crazy church people. There are villains in the church, along with quirky old ladies, gossips galore, and, wonderfully enough, genuine believers who want to do the right thing. Leona has been a pastor’s wife her entire adult life, working what amounted to a full time job as the shepherd’s helpmate in all areas of church work, and is left with no savings, no retirement, no money, and no security for the future when her husband passes. To make matters worse, she’s living in the church parsonage and spends the great majority of the book worrying that she’ll be thrown out of her home.

The book did reach a conclusion… somewhat. Not everything was tied up in a nice big bow, but that’s likely because there’s a sequel (and another two books after that!) in this series. I’m not sure I’ll read them, even though I really, really thought this was well written, entertaining, and right on target. I had so much anxiety reading this one (lol!) because of Leona’s situation and how closely I can identify with her plight. While reading, I had to go and check on Wes’s life insurance policy (yes, y’all) and his retirement account, making sure I won’t be totally destitute if he goes onto glory a little early. Maybe the next few books aren’t nearly as tense as this one and can be read by someone as crazy and paranoid as me. I’m sure I’ll jump right to the next book even after saying all of this because I really do want to know what happens to Leona’s children…

You should definitely pick this one up! (And it’s FREE!)