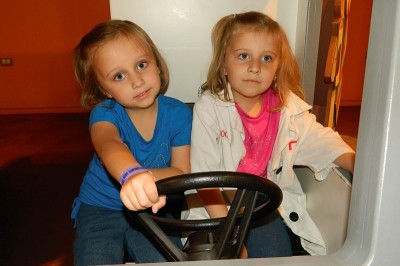 Yesterday, Ana kept telling me what the speed limit was. I was actually going below the speed limit the last time she did so, so I told her that it was fine, prompting her to share this tidbit with me…

“I just wanted to tell you so you would remember. And so the police wouldn’t pull you over and give you a ticket to go to jail. Like they did to Gramps.”

Hold the phone… what?!

Ana to me, “Yeah, he got stopped by the police the last time he drove us home.”

Me to Ana, “Did the police get out of the car and talk to you?”

Me to Ana, “Did he give Gramps a ticket?”

As it turns out, Gramps DID get a ticket, but Ana and Emma were too busy chatting in the backseat to pick up on that detail. But Ana just knew when the lights and the siren were going off that they were all going to jail because Gramps wasn’t staying under the speed limit.

So, grandparents, beware! If you break the law while your grandkids are around, they WILL remember and WILL tell on you!