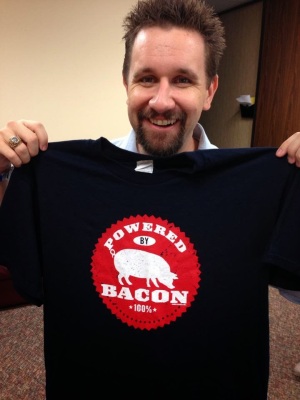 The girls?  Weren’t very funny this week.  Wes, however, was full of funnies.  Enjoy!

– Wes, on the subject of the Fresh Beat Band (which is on quite often here at the Faulk house), “Just like every other show out there.  Smart women, wise African American guy, and then? Your idiot white guy.”  Yeah, but the girls love him best because they get to laugh at him… oh, you’re right.  Idiot white guys are always bringin’ the funny, y’all.

– Wes, watching the Travel Channel, “Macao!  It’s like the Vegas of China!”  I’m not sure what he was thinking because by the time I got around to it, he was back to ESPN, so… ???

– Wes, from the pulpit, “You’re a sheep, and you’ll end up being pork chops.”  It took him a second to realize his mistake, too.

– Wes, regarding his early elementary school days and his undiagnosed issues, “Well, that was back when they thought I was stupid.”  You’ve come a long way, Wes!

– Me to Wes, “Back when we met, did you ever imagine that ten years would go by so quickly?” Wes to me, “Well, I thought it would take at least ten years.” Ask a stupid question, get a stupid answer.

– To the girls, as they were telling him their student ID numbers, “I’m not giving you two my numbers.  You’ll ruin my credit.”  Good thinking, Papi.

– Ana to me, regarding how I spend my days, “Do you spend all of your time kissing Papi?”  Me to her, “No.”  Wes’s response to this?  To lean over and pucker up dramatically.  The answer was still no, y’all.