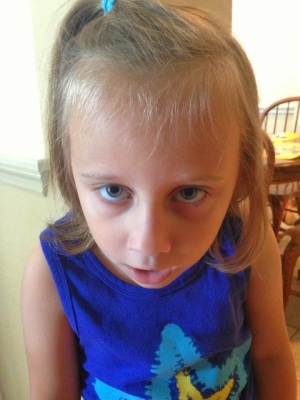 As you know, Ana is a bit of an overachiever.

She was stressing out the other day because all 99 is NOT a 100.  I don’t feel like I have much to add to the discussion at these points, because, being an overachieving little seven year old?  I get that.  I didn’t get my first B until college and barely survived that.  When I did, though, I discovered that I could skip a good majority of my classes, earn a B anyway, and — hey, hey! — still survive.  Which may not have been such a great thing to learn.

Wes sat down with her and gave her some wisdom on this particular night when it seemed as though the world would indeed end because she didn’t make a 100.

“Ana, you know what kind of grades Papi used to make in school?”

She looked at him and guessed, “Bs?”

She was a little horrified by this, as evidenced by the gaping mouth and gasp of disbelief.

Papi was unaffected by her astonishment.

Ana watched him for a minute, not saying a word.  Then, she went right back to lamenting that 99.