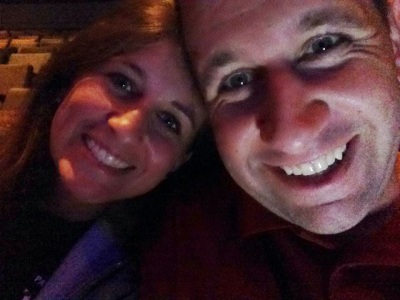 Last week, Wes and I had the opportunity to go out of town for a ministry conference.  This wasn’t his first time to attend this particular conference, but since the speakers change every year along with the theme, the emphasis, and the insights, he thought it was worth attending again this year.  And he thought it was worth taking me along because, frankly, he missed me so much last time that he spent every evening crying on the phone with me.  (Not really.  But close!)

With my mother-in-law at our house and prepared to take care of/spoil the girls in our absence (it ended up being a little of both), we left town on Tuesday morning after each of our Bible studies concluded.  My head was still swimming from all that was in the first chapter of Ephesians alone (seriously!), which may have been why I didn’t notice when the small crack in the windshield of the rental car we were driving spread… A LOT.

“Uh oh,” Wes murmured as it covered literally half of the windshield.  “That’s not good.”

Indeed it was not.  And what was even worse was that through that crack I could see downtown Dallas, which meant that pulling off the freeway in the middle of rush hour was a dumb idea, especially since I wasn’t all that sure where we were going.

“I think we need to call the car rental company,” Wes said.

Easier said than done, as it took me a while to get to a real person on the phone, then even longer to arrange a solution with him.  In the middle of this conversation, I saw that Wes was headed right towards a toll road, and because we were in a rental car with no toll tags, I could just imagine the fees and penalties heading our way once they finally tracked us down.  Lots of expenses on top of the expense of a new windshield, which was probably also heading our way.  Grr…

And he did, while freaking out about how I didn’t know where I was going. (And I didn’t!)  To which I responded, “Please.  I grew up in Dallas.”

(I grew up in Alvarado.  Which is about an hour away from Dallas.  I still remember telling my BSM friends that I “grew up in Dallas” on our way to a conference back in college and getting them spectacularly lost.  Hey, Alvarado was in the DFW metroplex which kinda made me an expert.  Except NOT.)

“This road will lead us to the loop.  The loop around the city.  The car rental guy said the car rental place is just off that loop.”

Once he knew my ingenious plan, I felt free to familiarize myself with the rental agreement and figured out that Wes hadn’t picked up the additional insurance because we had secondary coverage with our credit card company…. huh?  Sounded kinda nutty to me, which is why I got on the phone with our credit card company and spent the next thirty minutes being shifted around from place to place and person to person for answers.  Finally, someone told me that the secondary insurance would cover it… then said, “Wait, are you in Texas?”

“Yes,” I said, knowing somehow that my home state had let me down in a big, big way.

“Ohhhh,” she sighed.  “Well, then, because of Texas law, they’ll have to make a claim with your primary insurance.  We’ll cover what your deductible with them doesn’t cover, but you’ll need to fill out some paperwork.”  A pause.  “Do you have another thirty minutes for me to explain the paperwork to you?”

“I don’t,” I said, watching as Wes drove right past the rental place, then hit the steering wheel in frustration as it was slowly disappearing in our rearview mirror. (Missed the turn because his wife was yakking on the phone.  It happens.)  “I’m still on the road.  Can you email it all to me, and I’ll call you back if I need help?”

She said she would, adding that, “I sure hope your day gets better from here on, Mrs. Faulk.”

Well, it wouldn’t take much, honestly.

Wes managed to get back to the rental place where we went in, shared our tale of woe with the desk crew that had already been informed by the guy I’d talked to earlier, and sighed in relief when they said that we could just switch cars.  They led us out to the tiniest little vehicle we’d ever seen.  And we drive a Hyundai Accent, y’all.

“I’m not sure this is the same sized car,” Wes said, looking back at the spacious vehicle we’d just traded in.

“It is,” the girl said enthusiastically.  And then, she opened the door, and the smell of smoke nearly knocked us over.  Which you know, wouldn’t be a huge deal, were there not stickers all over the car telling us that we’d be fined more money if we brought back a car that had been smoked in.

No.  No, we were not all set.  Once it was clear that there were no other options as far as cars went, we had the lady detail both smoke and body odor (ugh) on her notes and our notes so that we wouldn’t be charged something extra when we returned the car in Houston.  We jumped into our tiny clown car with all of our luggage stuffed in the backseat (the “trunk” held Wes’s briefcase, for real) and headed towards the hotel.  I was kind of expecting it to be dismal like everything else had been that day and was pleasantly surprised when it wasn’t.  One win for the Faulks!  We met my parents for dinner (see, I’m totally from Dallas) and concluded the evening early.

The next day began with the smaller sessions portion of the conference, and I kid you not when I tell you that the first speaker made a joke about how we can get to a point spiritually where things like car troubles will get us so frustrated that we’re halfway to atheism before we know it.

And while I don’t think we had been halfway to atheism the day before… well, we had certainly been more frustrated than we should have been.  The speaker went on to talk about how David was being pursued and threatened on all sides, how his life was in peril, how he should have been without hope, and how he found his hope in who God was and who he was in God.  Finding our identity and our hope in Christ and not in the circumstances we find ourselves in — what a concept!

This was a fitting introduction to the week.  So often, I think we, especially as we minister in our church, lose sight of some of the basics of Scripture, of who God is, and how we should trust Him.  I’m going to blog more this week about some of the different things we learned while we were away, because like this lesson, most of the others were ones that God was good to “flesh out” for us during the week with real life.  God is so good to teach a clueless me like that, using real life examples of my idiocy.  (Praise Him!  I’m an idiot!)  I’m still processing so much, and I hope you’ll enjoy walking through some of these things with me in the days ahead.